An easy and practical introduction to tmux

Tmux is a one of the two main terminal multiplexers commonly used in the Linux (and BSD) world (the other being screen, which we'll mention a few times in the article).

What's a terminal multiplexer you ask? It's an old concept of a program built on top of a system terminal that would easily allow you to open multiple pseudo-terminals in a single terminal session.

They also usually provide ways to:

Most of the graphical terminal clients (yes, even on Windows) will allow you to open multiple terminal tabs and sometimes even lay them out on the same screen, for instance I heavily use Tilix which does just that: 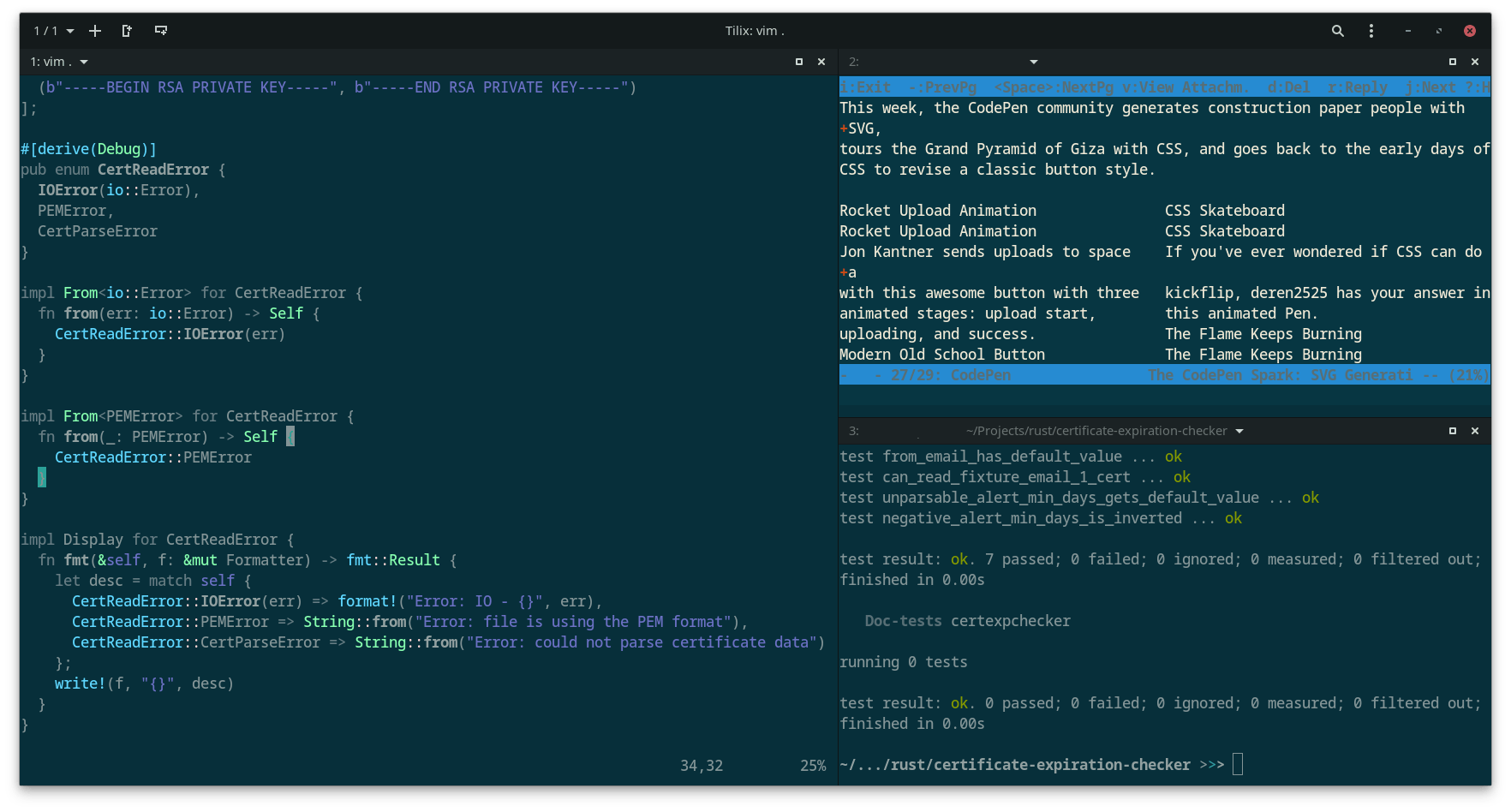 Tmux is different in that it always works, even with no graphical interface installed (e.g. when connected to a server using SSH) is very lightweight, and has the "detach session" feature. 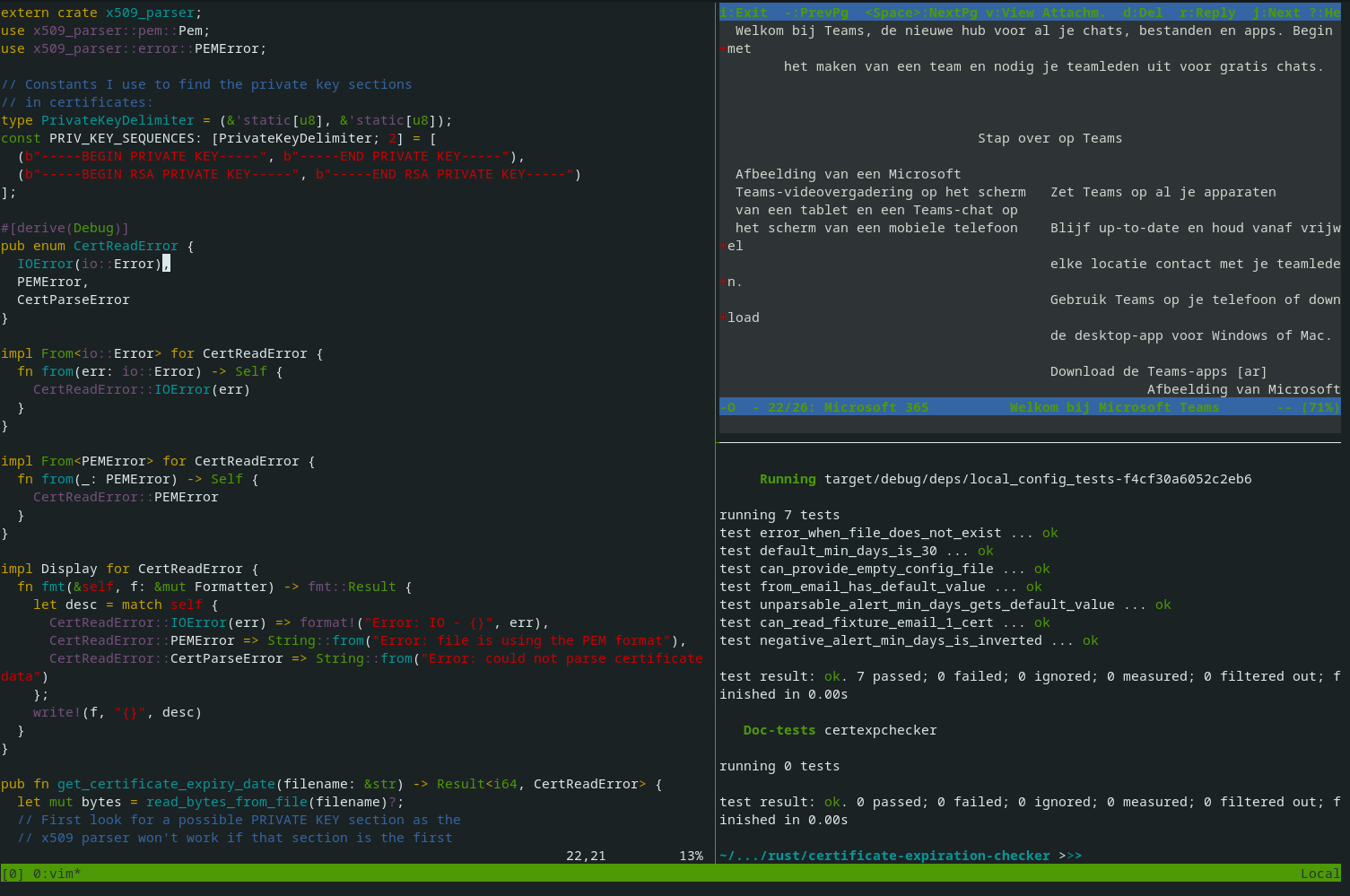 Logging out from an SSH session (or any terminal session for that matter) kills the terminal process as well as all of its children. Basically, everything is gone. With tmux, you can keep the session alive in the background with whatever commands were running in there before.

Of course there are various ways to manually detach processes (e.g. using the fork system call) so that they're no longer a child of a console process but this isn't trivial at all and tmux helps you do it from the topmost level with a single key stroke.

Another advantage of tmux is that you can bring it everywhere: on MacOS, Windows (using WSL), Linux, BSDs, server environments and more. Learn once, earn increased productivity on most of the possible work environments you could come across.

As we mentioned before, tmux doesn't need a graphical user interface but it doesn't need mouse support either, it's built in a fashion similar to the vi and vim editors in that you can do everything using the keyboard.

It doesn't quite get as far into it as vim does but many tmux users will customize it to have better key binds, usually close to vim and, if possible, on the home row of the keyboard.

The issue is that the early investment in learning tmux (or vim for that matter) is very high and not straight-forward in any way.

For instance, both vim and tmux support multi-pane views and have their own copy-paste buffers which aren't shared (they aren't shared with the system either if you're using a graphical interface).

Fixing these issues requires plugins and fiddling with tmux's config and all of that is quite a stiff wall to climb for someone that's not used to these kinds of tools, even though you can't argue how light they are and how practical it could be to bring your own development environment to modest servers with no issues.

I also perfectly understand how doing everything with the keyboard and optimizing keys to be very easily accessed makes you more productive in the end but it also tends to gimp any adoption of the tool whereas, if you look at something like Visual Studio Code, it's very easy to adopt but can be hard to master would you want to do everything as fast as possible or even with vim bindings (there are extensions for that).

I think there's value in fist getting to know a program before knowing if you want to go all in with it but I'm also aware some people have a personality time that is either go all in or don't go, which is fine, but this article is probably not for them.

A package exists as tmux in most package managers, it's pretty quick to install and should have almot no dependencies.

Before we start — tmux's main concepts

Just introducing a few concepts and keywords that'll apply all throughout this article.

Starting tmux can be just a simple as invoking tmux in command line.

This creates a new session, which is the detachable set of multiple terminal panels and tabs that you're going to use. In reality, it's a tmux process that exists on its own and is not a child of the current terminal session.

An implication is that if you suddenly lose your internet connection while you were inside of a tmux session on a remote server, the session won't be lost, you can immediately go back to it after reconnecting to the remote server by re-attaching it.

We'll see later on how to create multiple sessions and attach or detatch them.

Most of the keyboard shortcuts in tmux require pressing the "prefix keys" first.

You can see it as a way to access tmux shortcuts so that it (hopefully) doesn't interfere with the shortcuts of any console application you'd want to run inside of tmux.

The other terminal multiplexer, screen, uses Ctrl+a as its prefix, whereas tmux uses Ctrl+b by default.

It's popular to change it to be Ctrl+a, but I personally keep Ctrl+b. I'll explain how to change it later on when we get to write a starting config file for tmux.

From now on remember most of the shortcuts in tmux require the prefix to be entered first.

In the context of tmux, windows are the equivalent of tabs in other terminal emulators: terminal sessions that take up the whole screen and can be accessed using a keyboard shortcut (or the mouse).

You can create new windows at any time and tmux will keep them saved inside of the session, so that you get all of your previous windows back when you re-attach a previous session.

Because tmux works without any mouse support in a purely textual barebones terminal, it had to provide a way to browse previous output, select text and possibly copy/paste said text without relying on any other program (e.g. a graphical interface).

These operations require entering "Edit Mode", which is somewhat similar to "Visual mode" in vim as it allows you to scroll back and select text.

Suggested config file to start with

The tmux config file is supposed to be in your home directory as ~/.tmux.conf.

I tried to keep the config as short as possible but you'll find that some key binds are awkward to do on AZERTY keyboards (or any keyboard for some of them) and you may want to eventually rebind them.

Here are two lines to add to the config file to change the prefix to Ctrl+a:

The C modifier means Ctrl, whereas M is Alt and S is Shift.

How to use tmux

When not inside of a session already, you can create one by just hitting:

Or, rename it from inside the session by hitting Prefix,$.

The main reason to name a session is to make it easier to find out what it was about when re-attaching that session later on.

About that, to detach a session you just use Prefix,d.

The easiest way to list all the running tmux sessions is to run:

To attach a previous session, you have a few options:

As we said before, windows serve the same purpose as what would be called "tabs" on most terminal emulators. The list of opened windows for the current session will appear at the bottom of the screen:

Here are a bunch of what I consider the most useful shortcuts when it comes to windows:

Panels should probably only be used when you're comfortable with windows. They allow splitting a window in multiple terminal instances (still counts as one window).

To switch input to panels you can use Prefix + the arrow keys, or click a panel with the mouse if you have mouse mode configured.

You can also use Prefix+; to go to the most recent pane — Can be used to switch back and forth between the two last used panels.

Quick note: there is no way to easily rearrange horizontal panels unless rotating or rearranging the entire layout, see below.

You just press Prefix, then the arrow keys while still holding Ctrl (technically it's Ctrl+[Arrow Keys] because your prefix might not have Ctrl in it).

Windows and panels are all well and good but if you try to work on tmux after having only used graphical terminals you'll find the biggest hurdle is how to browse back the output and copy paste text.

We enabled "mouse mode" earlier to make onboarding easier, an advanced tmux user would do everything with the keyboard.

The bindings for Copy Mode will also mostly be the same used in the vim text editor but you don't have to know anything about vim to get started here.

If you have the config provided above, Alt+c (without the prefix) enters copy mode.

Scrolling with the mouse wheel or a touchpad gesture should also automatically enter copy mode.

You'll know when copy mode is active because a line counter will appear on the top right.

The copy mode shortcuts do not require the prefix.

If you have the config provided in an earlier section, the vim bindings are enabled in copy mode, although the behavior is not exactly that of vim for the searches.

I'm not describing the copy/pasting as I consider this advanced usage, but with mouse mode inside of a graphical interface you can copy/paste by selecting using the mouse and your terminal emulator copy/paste shortcuts. There's just one caveat in that you'll probably have to hold Shift during the selection.

Sometimes mouse mode is actually bothering me, it can be turned off by bringing up the tmux prompt using Prefix,: and entering:

There's a lot you can do with tmux that wouldn't fit in this article which is already arguably too long.

Would you want more, don't hesitate to let us know in the comments below.