Most of them are part of the JavaScript ecosystem and run through Node.JS.

It can be daunting for some backend developpers from the pre-Node era to actually add one of these to their projects even though the gains are always substantial.

In this article, we'll try to present a way to easily add module bundling to a practical backend project setting using the 0-configuration bundler Parcel.js.

We picked Spring Boot (Java) and .NET Core (C#) to serve as examples.

Why using a module bundler?

They serve a few main goals:

Having a limited amount of script and CSS link tag imports and external resources in general will speed up your page loads by reducing the amount of necessary HTTP GET requests, and even more so considering these assets will also be minified by the bundler to have the smallest possible footprint.

That is still true in a world where HTTP/2 becomes more generalized. HTTP/2 does help a lot with diminishing the impact of having a lot of small file requests since it can pipeline all of them in the same connection and multiplex the whole thing.

Still, even with HTTP/2 module bundling gives you some significant advantages:

In the Node ecosystem we mainly got these four:

The main idea is always the same: you provide the bundler with an entry point (usually a .js file) that has all the imports for all the modules required for your app. The bundler then creates a dependency graph and outputs a bundle containing all the module code packed and linked together.

Webpack heavily relies on plugins and loaders which are a big ecosystem of their own. The configuration file tends to get pretty big even on small projects.

We have used Webpack on the previous article about our no-dependencies lightweight PHP setup project, mainly because we wanted to rely on some of its configurable features for cache busting but please have a look on that project after reading this article if you're interested in going deeper into module bundlers.

In my opinion, the most straightforward bundler to use today which also offers easy access to the most powerful features (SCSS, Typescript etc.) is Parcel.js and we'll try to sell you on how easy it is to add to your project, as this would translate to any backend language.

You need Node.JS installed as well as the Node Package Manager, which is the npm CLI command (npm is included in most Node.JS setup packages).

Parcel (and module bundlers in general) use a significant amount of disk space (about 100MB) which can add up if you're installing it locally to a lot of projects.

We like to install it globally and then use it through npx in projects.

With Node.JS installed we can immediately install Parcel globally:

We'll be using Java for the project and generate the base template through the Spring initializr page.

We used the following settings (we added Web starter and Thymeleaf): 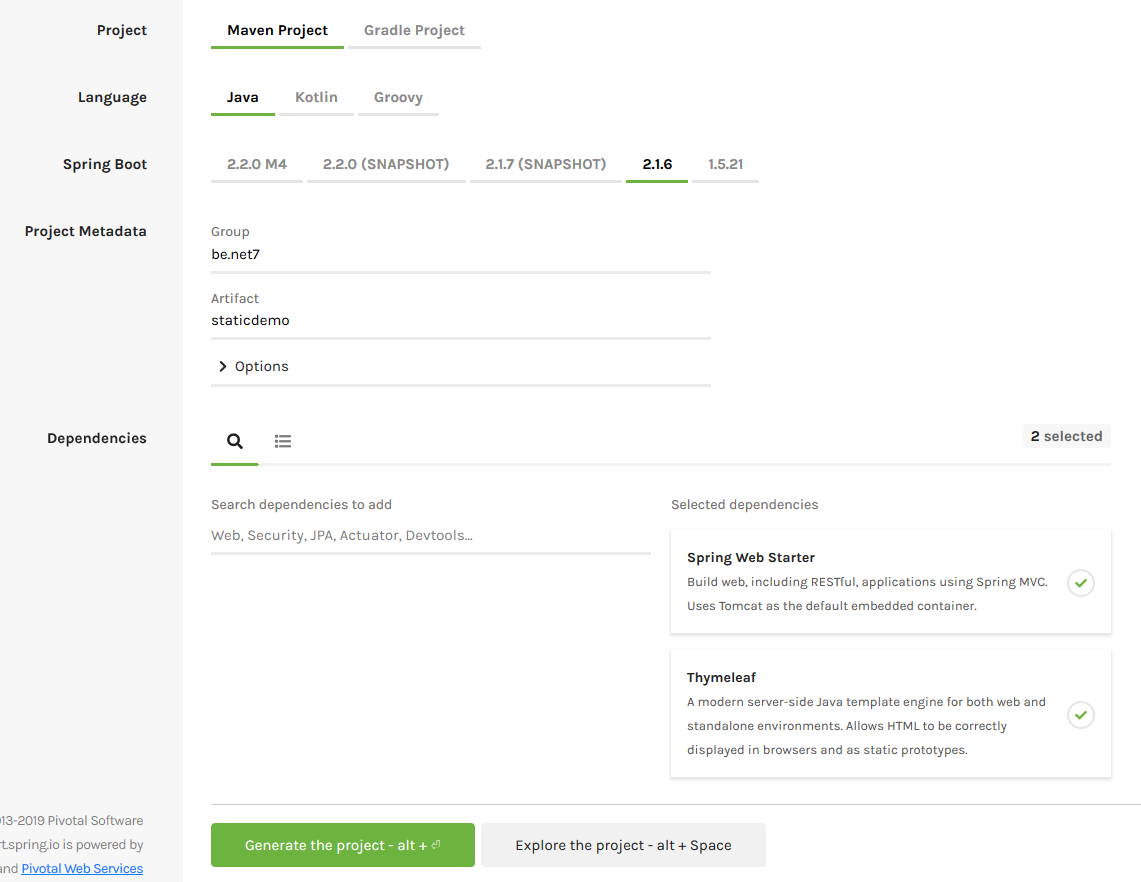 To add module bundling to the project, first extract and open it with your editor of choice.

If you want to follow along using the already built example project, you'll find it on this Github repository. Make sure to read on to the section about the npm scripts if you're on Windows.

The project comes with a pre-generated .gitignore file. We just need to add the node_modules (Node.JS) and .cache (Parcel) directories to it:

The bundler will generate the production assets for us, but it needs source files to do so (the so called entry points).

We chose to create these in the /src/main/resources/src (which needs to be created as well):

The .NET Core project will show how to use SCSS. For the current one we just used a single regular CSS file.

You have to reference that CSS file inside the main entry point (main.js), which in turn looks like so:

We're using JS modules here but you can use CommonJS and require instead.

We're referencing the script src and CSS file href through the "/assets" directory.

Ready the project to use Parcel

We need to be able to use npm, even though Parcel itself is installed globally on our system (see the Requirements section above). This is achieved through issuing the following command at the root of the project directory:

Since we're going to use npm to run and build the project, we also want the package concurrently to easily run Parcel and the Spring Boot dev server simultaneously:

Now let's prepare our npm scripts. Edit the package.json file to have a scripts section such as the following:

We can now use:

Parcel and the Java server will be kept running with the app available on port 8080:

Note about Windows: That setup won't work on Windows, the quickest workaround is to just edit package.json and change all the occurrences of ./mvnw to mvnw.

The --public-url argument we give to Parcel serves to indicate the assets are not going to be served at the root of the web server but somewhere else (in /assets). The bundling will still work without this but source maps may not work in development mode.

If you build the project, you'll notice that the files generated in src/main/resources/static/assets are minified, whereas they are not when you use npm run dev.

Running parcel build automatically sets the production settings and also transpiles ES6 for you with no configuration required, which means you don't need a .babelrc.

If you do need more precise transpiling settings, for instance to support React's JSX, you can just create a .babelrc file and Parcel will pick it up and use it. Yes, it's that easy.

It's very easy to make it so that Spring Boot will add a version string to your assets in the Thymeleaf template we wrote before.

Because we're using the special attributes th:src and th:href, the URLs are going through the Servlet chain for processing.

You just have to add the following lines to application.properties:

Now start the dev server using npm run dev and have a look at the source, you should see the version strings:

Anytime the assets file content changes, the hash will change too and clients will know to request for the new version of the file.

The process is going to be very similar to what we did with Spring Boot and as such I might provide less details.

Let's start with a project template available from the .NET CLI that's centered around Razor pages.

If you want to follow along you will need to download and install the .NET Core SDK.

We just created a directory and ran:

The example project can be found here.

The template does not have one. We're using this one:

Ready the project to use Parcel

We need to initialize a package.json file and install concurrently, exactly as we did for Spring boot:

We're doing it first this time around because we need npm to install something in the next step. Keep in mind the npm scripts won't work until we create the source assets and output directory.

By the way there is no caveat about Windows for this project, the scripts will work on any platform.

As with the Spring Boot project, the two main scripts are:

As we do not use IIS for hosting .NET Core projects we want to edit the .csproj file to change the hosting model:

Create a src directory at the root of the project in which we'll add the main entry point for the bundler. The choice of using "src" is totally arbitrary.

The original Razor pages template includes Bootstrap and JQuery. We're going to keep these around for the exercise but we'll be:

From the project root, install Bootstrap:

Open "main.js" and import our SCSS file and Bootstrap (which imports the JavaScript for Bootstrap only (also includes JQuery)):

We could import the SCSS for Bootstrap from "main.js" as well but since we're using SCSS we can use the more adequate @import command in css/main.scss:

Little sidenote here: this imports the whole of Bootstrap. Using SCSS you can pick and choose only the modules you're using which would reduce the size of the final bundle.

Let's leave the source assets and create the wwwroot/assets directory to be the destination of the bundled files generated by Parcel.

That directory is actually not part of the published project by default, we need to edit the .csproj and include it like so:

The Razor pages template uses a template as the layout for all the pages.

The file is at Pages/Shared/_Layout.cshtml.

If you have a look at the original one you'll see there are <environment> tags that decide whether to import the static libraries that are in wwwroot/lib or URLs from a CDN.

We can get rid of all of that and just import the future files to be generated in wwwroot/assets.

And the following script tag at the end of body:

We used a simple solution which is to add an argument to the link and script tags inside of _Layout.cshtml:

The article is already too long for its own good, but we wanted to touch briefly on code splitting.

The thing is, having one big bundle is great for compression and overall server overhead, but it's not great for caching, because for every single small change of your JS client code, the whole bundle will have to be downloaded by all of your clients.

There is a common practice in bundling which is to split the "libraries" from your actual application code.

For instance, in the case of the .NET test project, we would put Bootstrap, JQuery, etc. in their own bundle, and add another bundle for our code.

In that situation, we have the library bundle that is unlikely to change, and can be cached by clients for great benefits. The gain from such a tactic is especially significant when you're using a lot of client-side libraries.

The simplest way to achieve that basic code splitting with Parcel is to have more than one entry point. For our test projects we had "main.js", but we can provide Parcel with more than one of these.

We could have a "lib.js" files with the Bootstrap import, and just add it to our parcel commands in package.json. For instance:

Where we just gave another .js file to the parcel command.

You could also split CSS this way by having some CSS imports in the "lib.js" file and the others in "main.js".

We hope to have demonstrated that you don't need a ton of requirements and complex configuration to get module bundling including extra features like SCSS or TypeScript in your existing backend project.

The basic idea is always the same and is also a good gateway to eventually trying out Webpack or using a frontend library.

You can also transfer your static assets processing logic over to any new backend technology when you understand the basics of it.